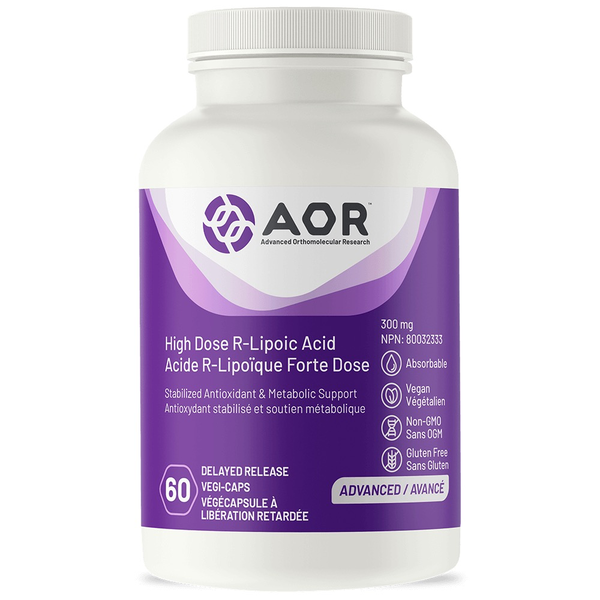 Lipoic acid is a versatile antioxidant known for its ability to protect the brain and nerve cells from free radicals and heavy metals that promote cognitive and neurodegenerative diseases. Lipoic acid is known as the “captain of the antioxidants” due to its ability to recycle and recharge other antioxidants such as vitamins C and E. Numerous studies have shown that lipoic acid can balance blood sugar and repair nerves damaged by diabetes. Additionally, this powerful anti-aging nutrient has been shown to mimic some of the effects of caloric restriction, the only proven method of extending health span and lifespan. It does so by protecting the mitochondria against free radical damage. Due to its action on the mitochondria it can revive damaged cells, especially those found in nerves and in the liver. It is a powerful partner for glutathione, the most powerful antioxidant produced in the body.

R-Lipoic acid is a powerful, natural and well-rounded antioxidant with many actions such as repairing nerves, balancing blood sugar, protecting the brain and increasing energy formation in the mitochondria. Regular doses of lipoic acid are recommended for maintaining overall general health while high doses of R( ) lipoic acid are recommended for the management of high blood sugar, diabetic neuropathy and weight.

AOR™ guarantees that there is not more than 14 mg of S-lipoic acid per capsule, and that all ingredients have been declared on the label. Contains no wheat, gluten, corn, nuts, peanuts, sesame seeds, sulphites, mustard, soy, dairy, eggs, fish, shellfish or any animal byproduct.