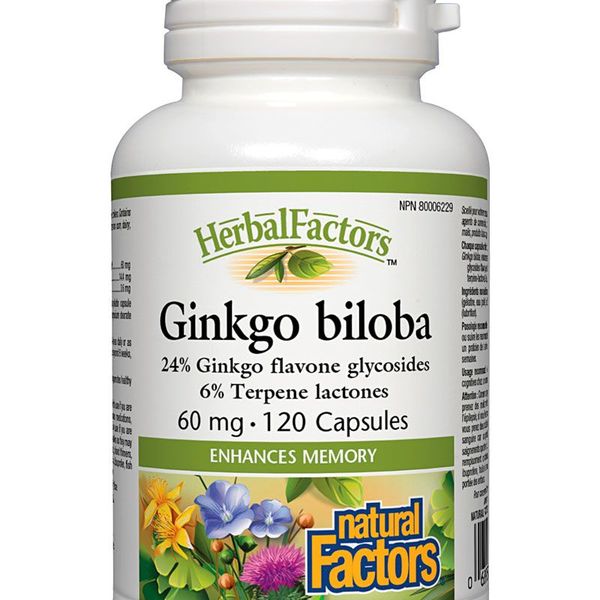 -Increases blood flow to the brain

-Support for vertigo and tinnitus

-May help in the early stages of Alzheimer's

HerbalFactors Ginkgo Biloba Phytosome from Natural Factors helps enhance cognitive function, boosts memory, and helps support peripheral circulation in a standardized formula to guarantee high levels of key plant actives. Ginkgo biloba in European studies has shown to increase blood flow to the brain and extremities, helping to improve memory and mental sharpness. Ginkgo may be helpful for the early stages of Alzheimer's disease; circulation problems, especially intermittent claudication, and vertigo and tinnitus, if it is of vascular origin.

Gingko biloba is well known for its positive effect on memory enhancement. European studies have shown that the extract from the gingko biloba leaf improves blood flow to the brain and extremities, helping to improve memory and mental sharpness. Ginkgo has a demonstrated ability to boost cognitive function, and may be helpful in the early stages of cognitive decline and dementia.  Ginkgo flavone glycosides are a balanced group of bioflavonoids primarily responsible for ginkgo's ability to inhibit platelet aggregation (stickiness) and its antioxidant activity.

HerbalFactors Ginkgo Biloba from Natural Factors is standardized to guarantee a minimum of 24% ginkgo flavone glycosides and 6% terpene lactones, the key active compounds in ginkgo.